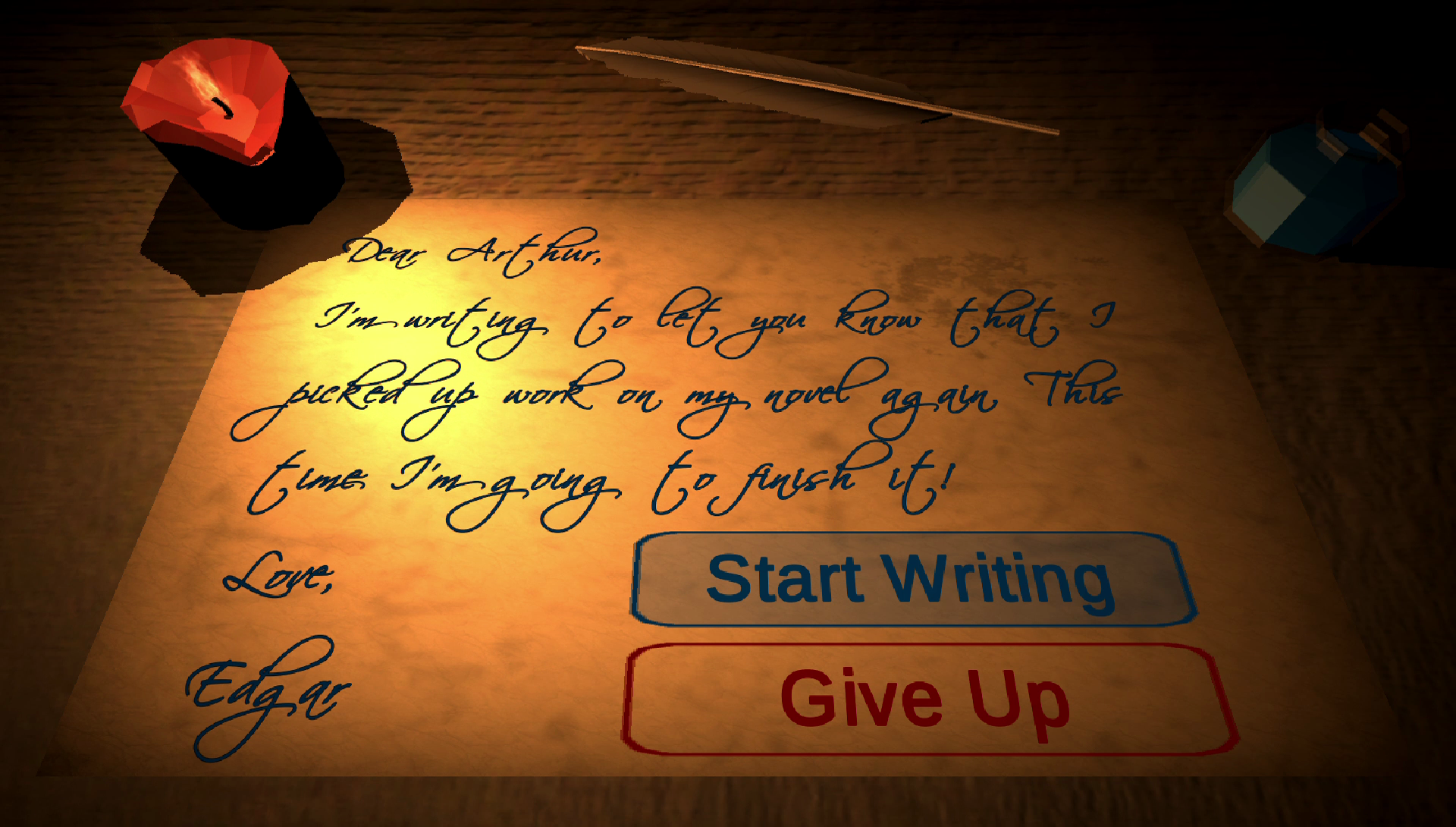 Edgar is an author disturbed by his thoughts of failure. He has started writing his novel numerous times but has discarded his work each and every time. Why does he keep doing this? Why does he work so hard only to scrap everything?

Play as Edgar in this game about exploring writer’s block. Join him as he pushes aside obstacles along the way to finish his novel and flees from the doubts haunting his mind.

Writer’s Block was created for the Ludum Dare 39 Compo  in 48 hours. The theme was “Running out of power”. It placed 23rd in Innovation and 25th in Mood (and 492nd in fun which is kind of the point with a writer’s block 😉 )

Check it out on itch.io! 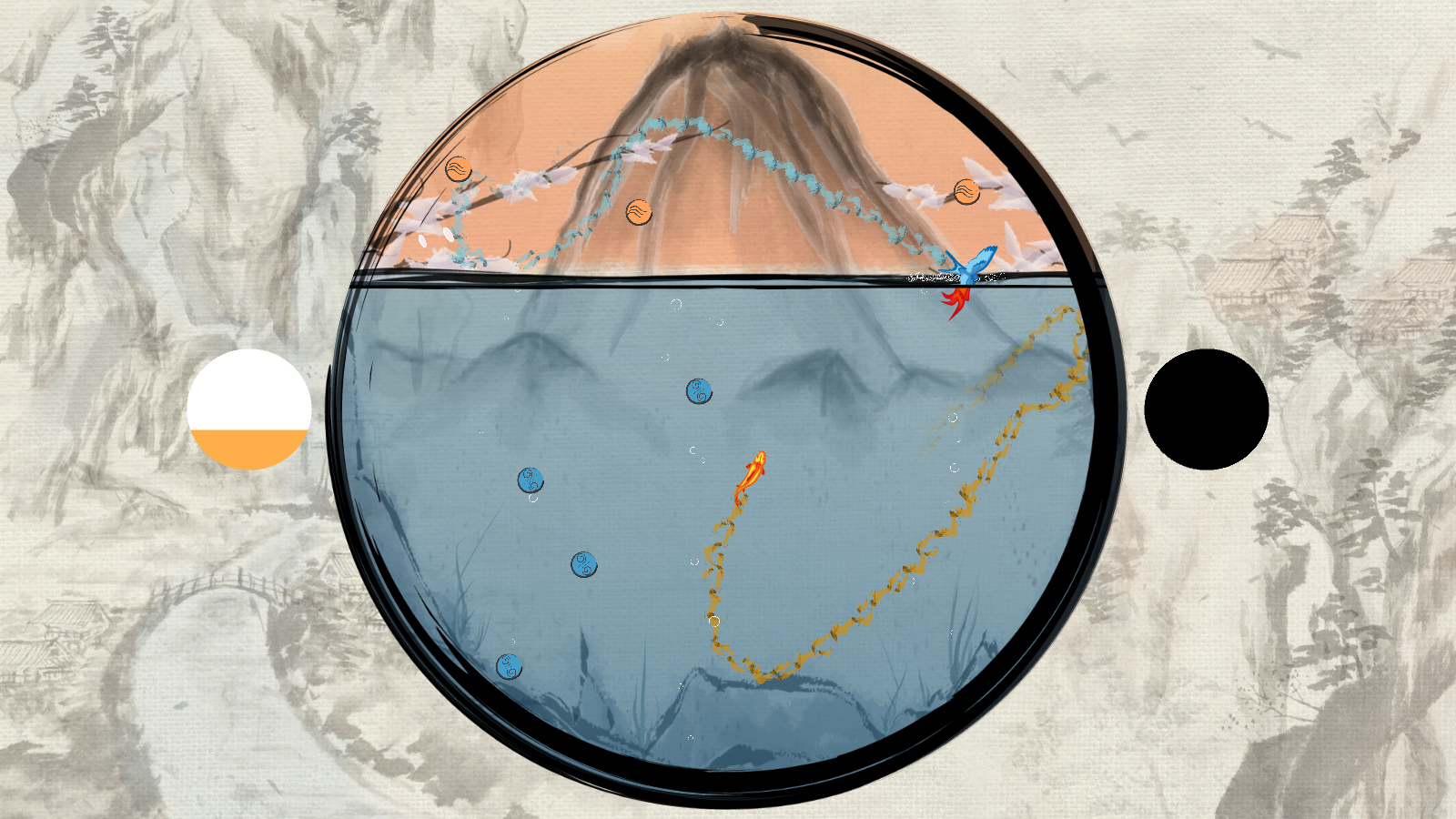 A Tale of Wind and Sea

Explore the seemingly impossible relationship between two beings that are fundamentally different.

A local multiplayer game for 2 players, in which you are sharing a controller with a friend to control a fish and a bird. When flying through the air or swimming through the sea you generate a current which you can use to build up your speed. If you are fast enough you can try to jump out of your habitat and catch the other animal. By collecting orbs you can alter the sea level to your advantage.

This game was developed for Game Makers Toolkit Jam and was selected as on of 20 featured games out of 764 total entries.

Check it out on itch.io if you are interested! 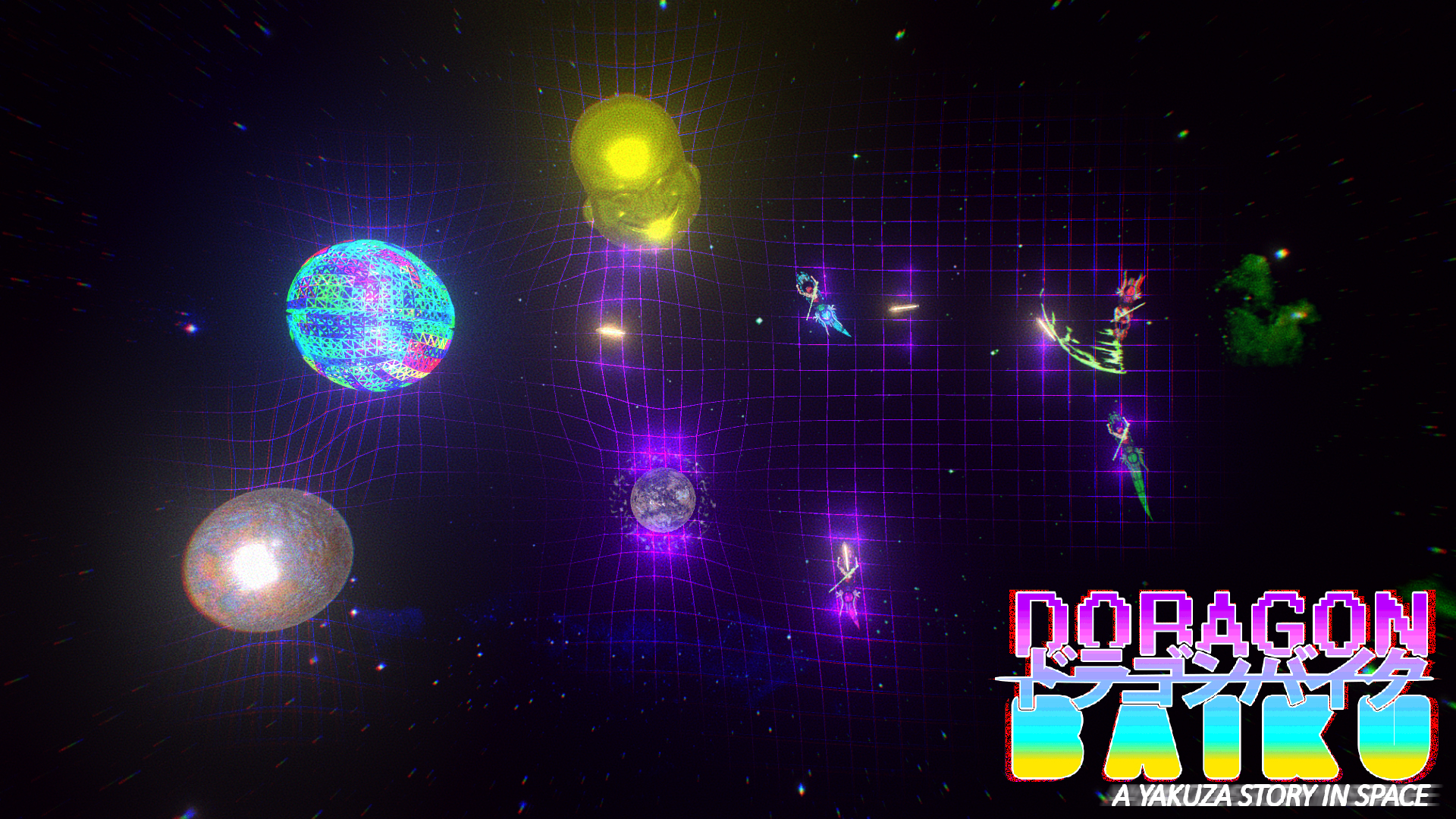 Doragon Baiku was made for beansjam (and got 4th place! Woohoo!) by a team of seven people. I was responsible for Programming.

Doragon Baiku is a 4 Player Multiplayer Gravity Shooter with Yakuza Space-Bikes and Laser Katanas… IN SPAAACCEEE!

Check it out on gamejolt if you are interested! 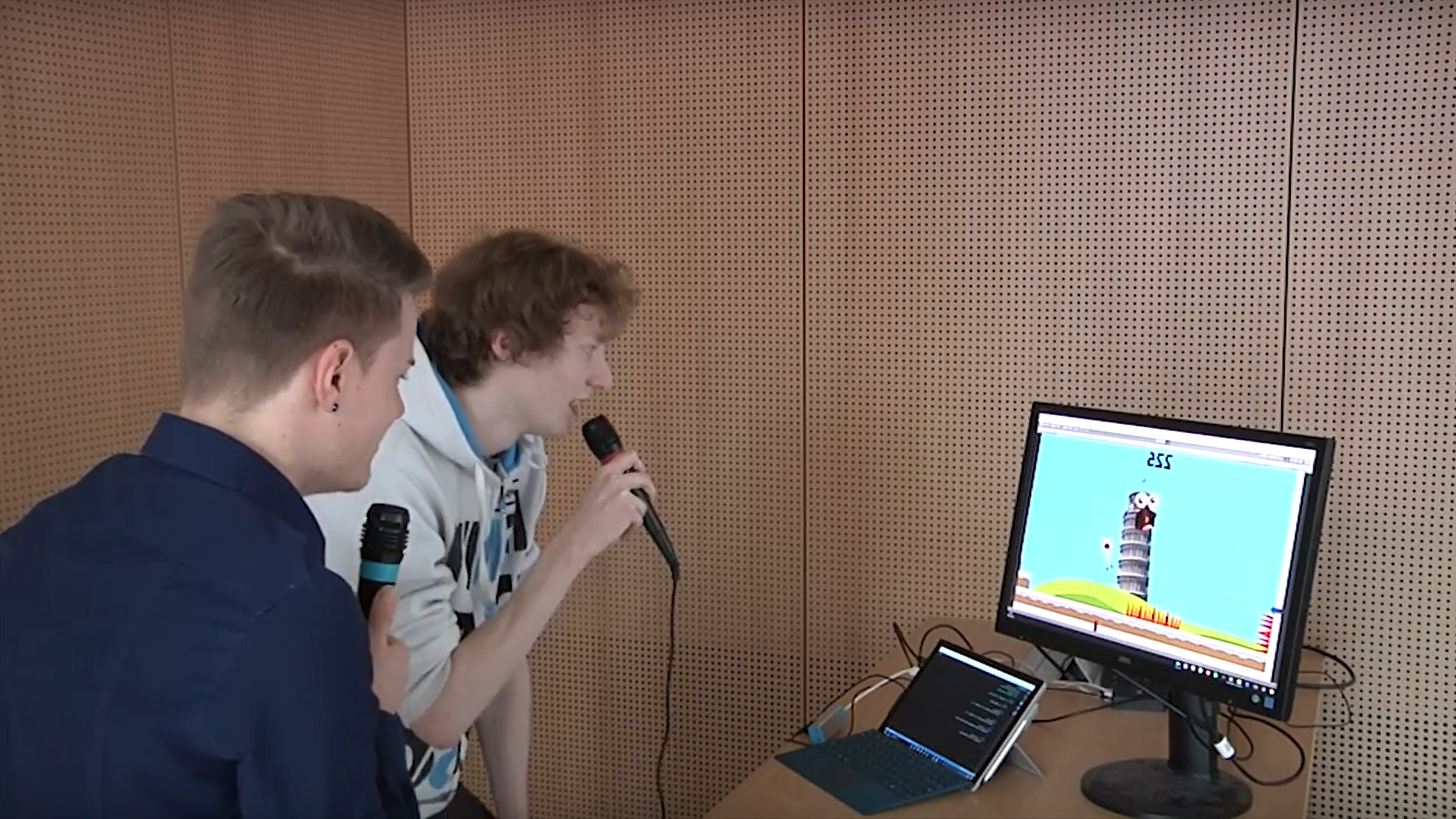 Scream Around the World

Scream Around the World is an endless Runner, where you and your friend cooperatively control a character in a cartoony, vibrant but also apocalyptic 2D World – think World 1-1 on doomsday – in order to flee your inevitable death. One Player controls the character’s horizontal movement while the other controls its vertical movement. The catch is that your only input is your voice and the characters movement follows your volume levels. So in order to escape armageddon scream loud and run fast!

We started development on Scream ‘n’ Run after feeling especially inspired after a game jam. The idea was to have a game that would really do well being displayed at a convention. We soon came to the conclusion that having your players scream constantly at your booth was a good way to attract more people.

Check out this gameplay video of Scream Around the World.

alpha is a student club I founded together with Justin Zwack in 2015.

We wanted to establish and promote a game developer scene in Mittweida where we both studied Media Informatics and interactive entertainment, by giving developers a platform where they can share ideas and their work with fellow developers from the area.

We started by organizing monthly meetups where people would give presentations about game development. These meetups became more and more popular and in the summer of 2016 we organized our first game jam.

In 2017 we gave the projects into the hands of the next students. 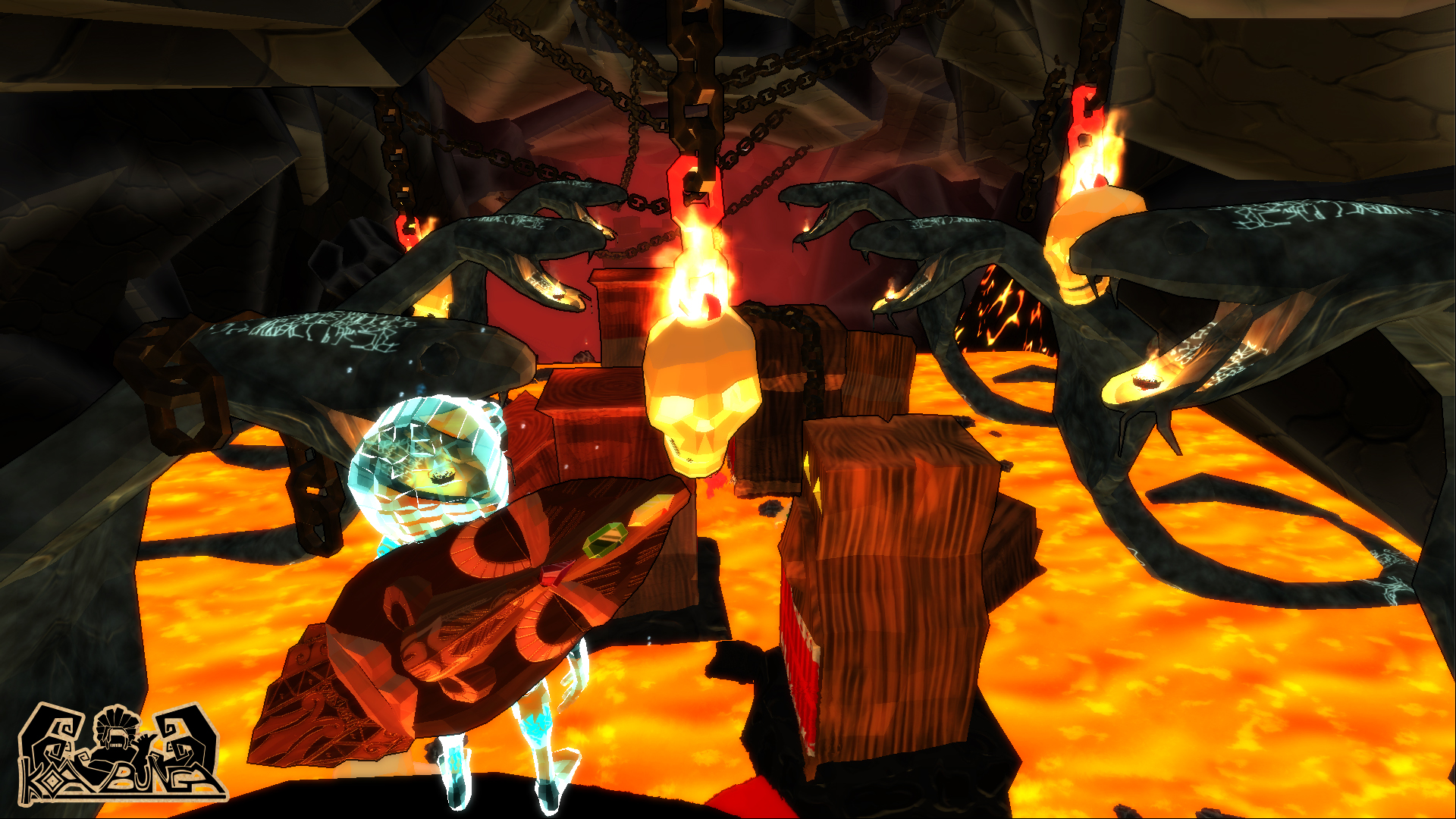 Koa Bunga is a student game which was made with 62 students within four months. The team was structured into nine different departments. I was the lead for the programming department.

Koa Bunga is a blood surfing puzzle platformer, in which you use death to your advantage and solve challenging puzzles to get you out of hell. It combines hardcore puzzle platforming with fast-paced surfing and deadly tiki abilities.

Koa Bunga was greenlit. Go check out its storepage! 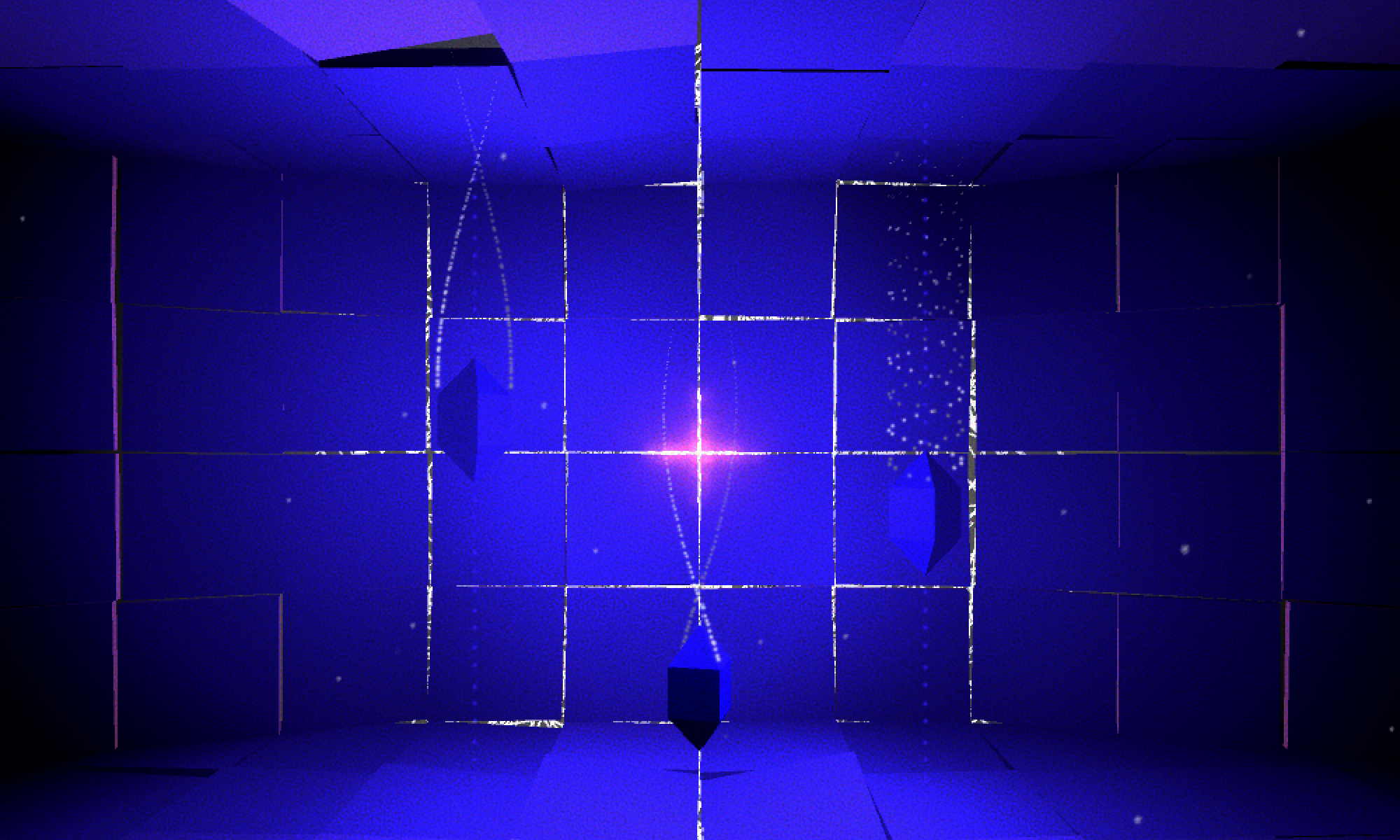 Insight is inspired by the aesthetic of OCTA VR a trippy VR experience I got to try out when I worked at A MAZE 2017.

It is a game about uncovering a hidden monumental secret by tuning soundwaves. Check it out on itch.io if you are interested in playing it! 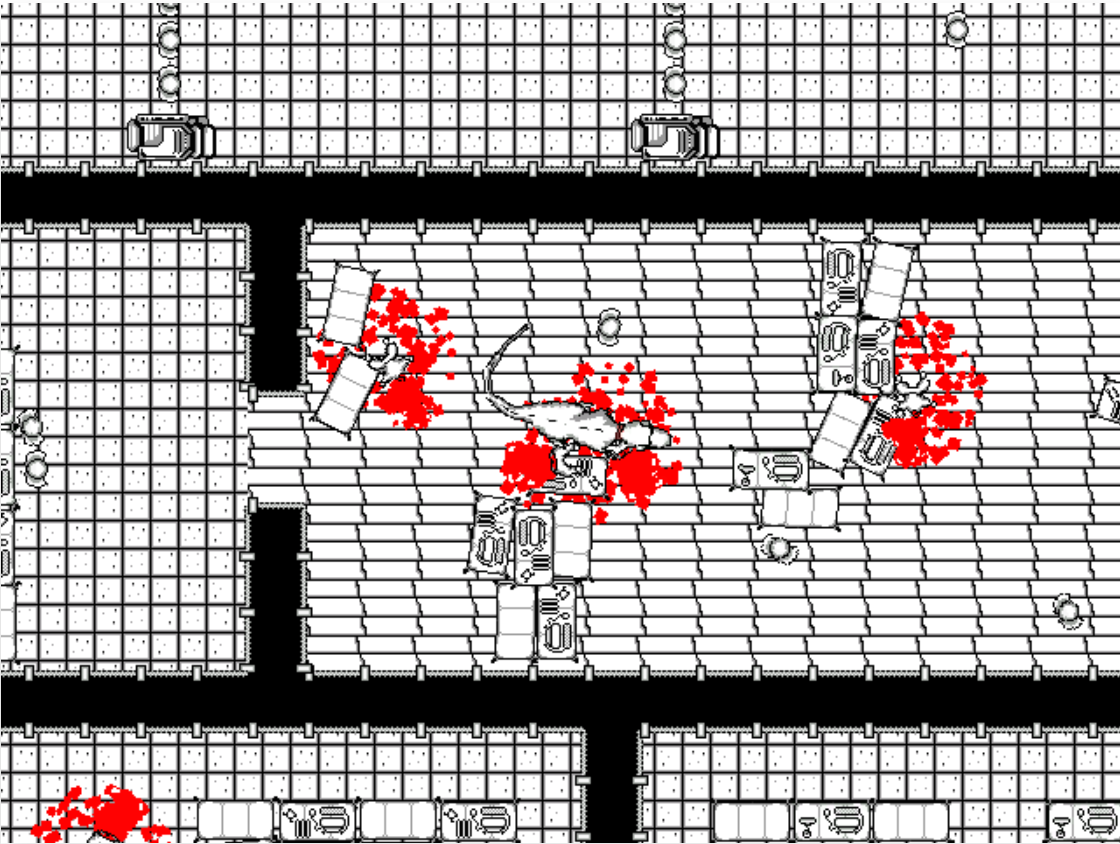 In Pete Rex you play as P.T-Rex a dinosaur undercover disguised as a human office worker. You try to prove that humans and dinosaurs can live together in peace by showing that people would not even notice a T-Rex working alongside them. So try to work your way around the office without eating too many of your co workers.

Pete Rex is a game jam game we created with a team of four people. I was responsible for programming. Go check out the online version here! 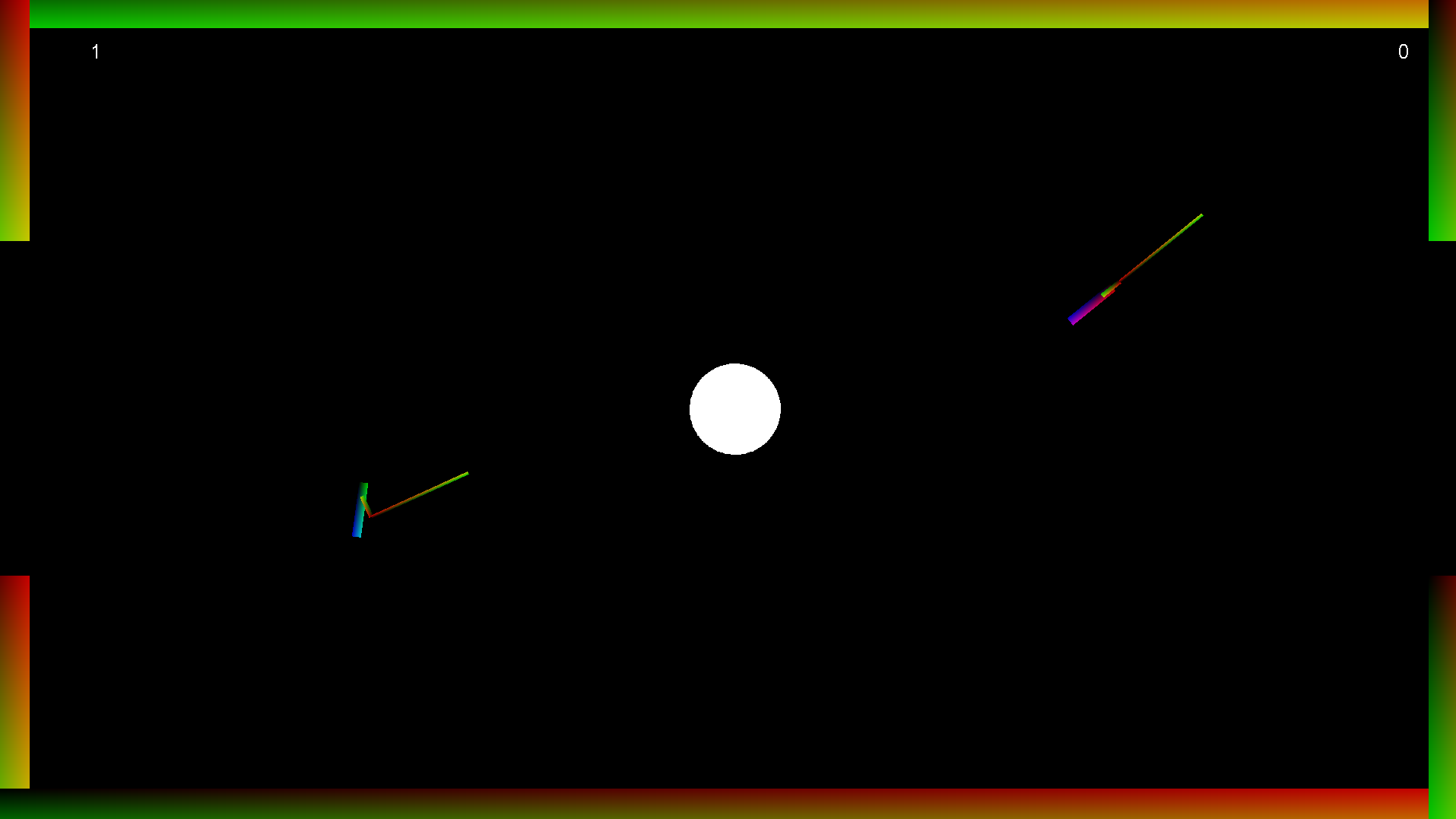 Check it out on Github! 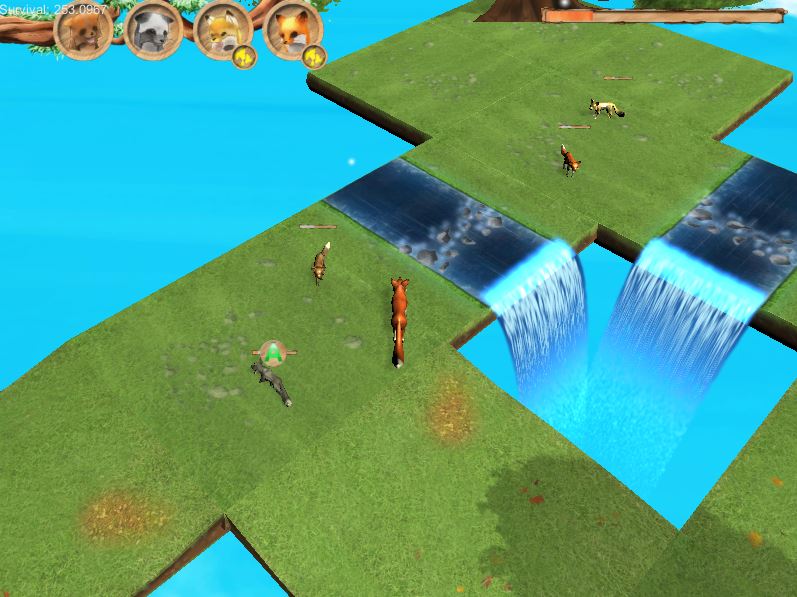 In Zuflucht you play a fox mother who has to raise her cubs. You have to adapt your playstyle to the different skills and needs of your children to prepare them for a life without you. But be careful it is hunting season!

I was the Programmer for Zuflucht and I was also responsible for the general concept. 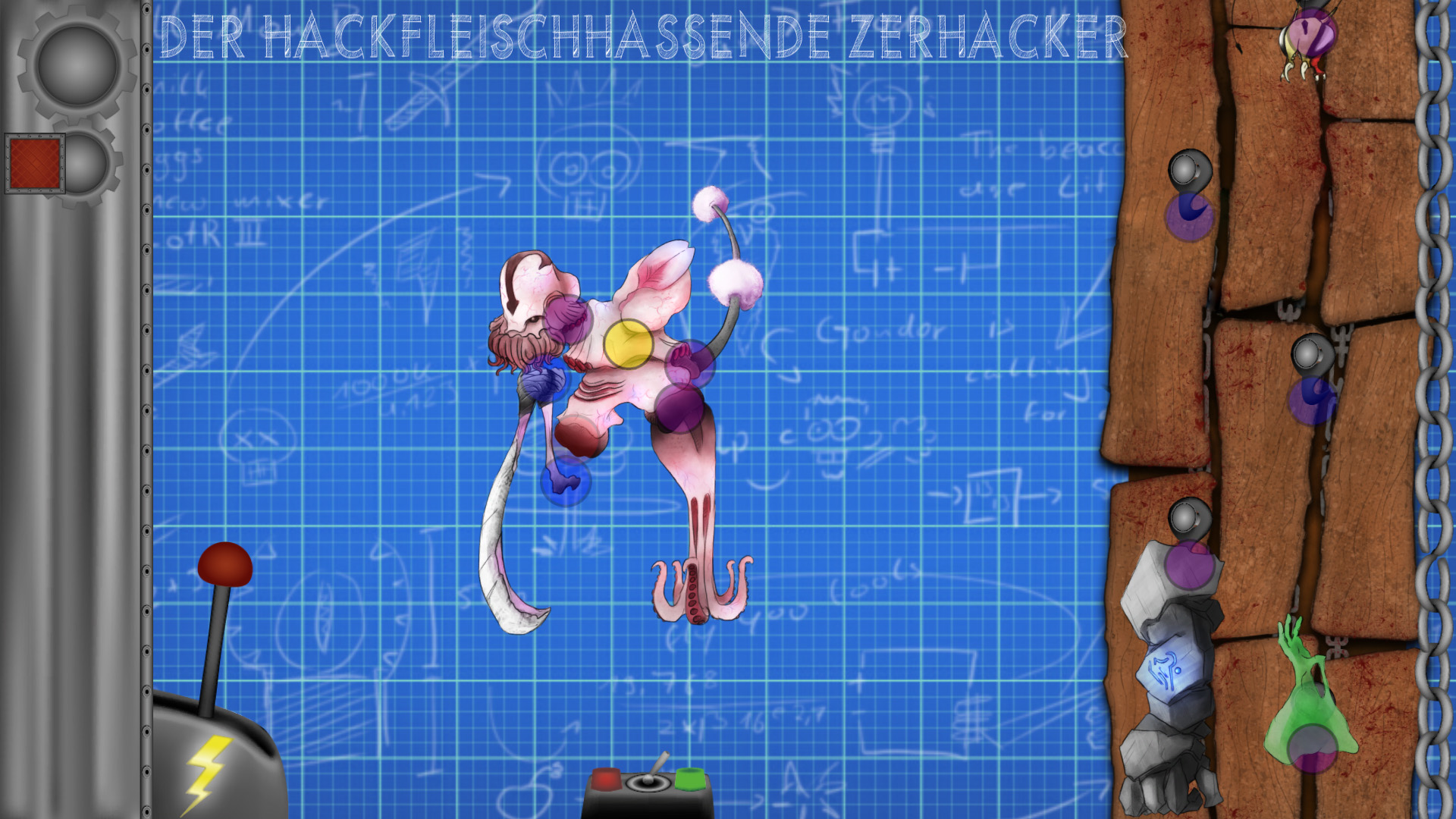 What the Frankenstein?! is a multiplayer party game in which a monster name is randomly generated (think Diablo elite monsters). The players all have different monster parts which they can stick together in a modular system to best match the given description. After that the players all vote on who did the best job.

What the Frankenstein?! was the first game I created in a game jam. We were a team of five people and I was responsible for Programming alongside another team member. We did not actually finish the network capabilities of the game so it is more or less only a monster construction kit with randomly generated monster names. 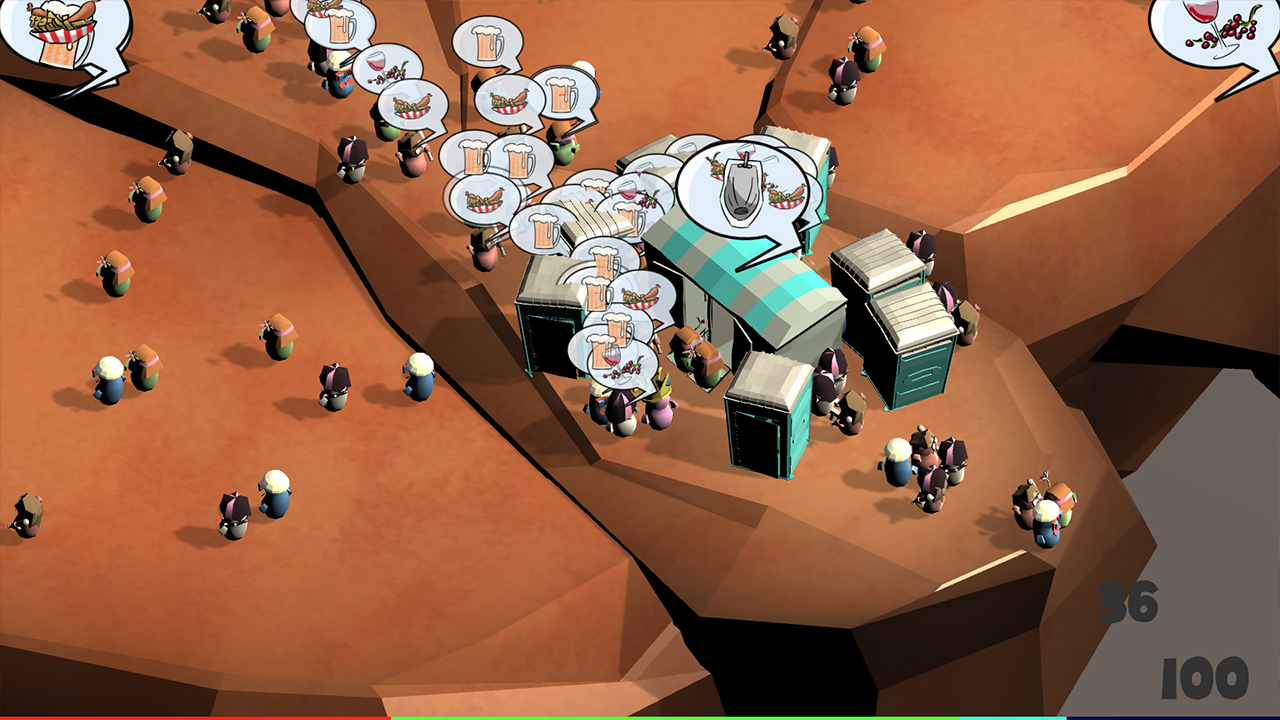 What do you want?

In What do you want? you play the king on a music festival. By managing and fulfilling the needs of your subject you can gather a massive following. But be careful as you might be catering to a crowd with extreme needs.

What do you want? is a game I developed at a game jam together with a team of myself included 7 people. I was responsible for Programming together with another team member. 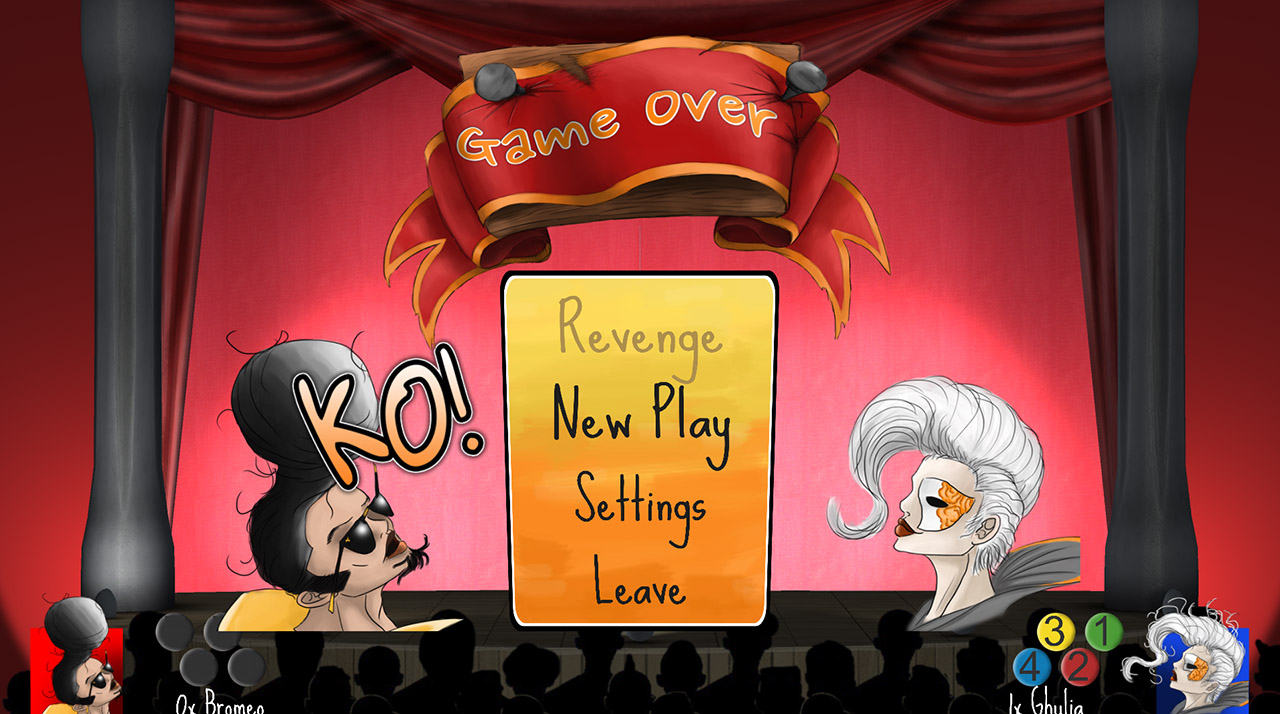 Crush your components under theatre props in this multiplayer brawler!

We developed this project with seven people. Rumblesque was the first game I made in Unity. I was responsible for Programming.